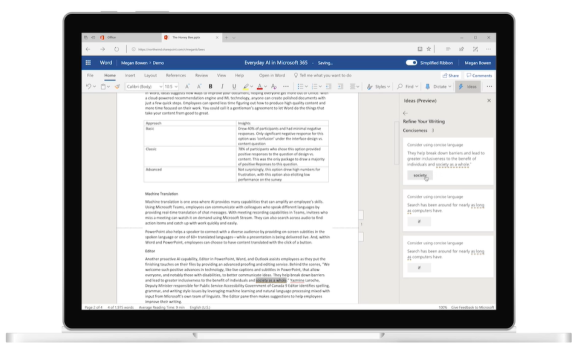 The first day of Microsoft’s Build developer conference is typically chock-full of news, and this year was no exception. During a keynote headlined by CEO Satya Nadella, the Seattle company took the wraps off a slew of updates to Microsoft 365, its lineup of productivity-focused, cloud-hosted software and subscription services. Among the highlights were a new AI-powered grammar and style checker in Word Online, dubbed Ideas in Word, and dynamic email messages in Outlook Mobile.

Ideas in Word builds on Editor, an AI-powered proofreader for Office 365 that was announced in July 2016 and replaced the Spelling & Grammar pane in Office 2016 later that year. Ideas in Words similarly taps natural language processing and machine learning to deliver intelligent, contextually aware suggestions that could improve a document’s readability. For instance, it’ll recommend ways to make phrases more concise, clear, and inclusive, and when it comes across a particularly tricky snippet, it’ll put forward synonyms and alternative phrasings.

In practice, Ideas for Word might propose swapping “society as a whole” for the more concise “society.” And with each suggestion, it’ll provide justifications and explanations, such as why “then” should be used in place of “than” in a specific context.

Ideas in Word will additionally provide estimated reading times, extract and highlight key points in paragraphs, underline potentially sensitive geopolitical references, and decode acronyms using the Microsoft Graph, a unified programmability model and APIs that provide access to data within Office 365, Dynamics 365, Enterprise Mobility and Security, Windows 10, Azure Active Directory, and more. Presumably, as with Editor, users will be able to add style guides that inform its suggestions, if they so choose.

A preview of Ideas in Word will roll out to Office 365 customers in June, ahead of general availability in the fall, perhaps not coincidentally on the heels of Google’s AI-powered Grammar Suggestions feature in Google Docs.

And that’s not all. Also heading to Word Online is a Google Docs-like Mentions feature that will let users ping collaborators by typing an ampersand followed by their username or email address (e.g., “@john”). You won’t need to memorize names, fortunately — a drop-down list of suggested contacts will appear once you begin typing — and Word will automatically send an email notification to whoever’s tagged.

Above: Mentions in Word Online.

Mentions was announced in December 2018 and began rolling out to folks enrolled in the Office Insiders program shortly afterward. It will launch broadly this summer.

These were previously only available in the Outlook desktop client and Outlook Web Access.

Statement sleeves and sharp tailoring: the enduring style and legacy of Judy Garland