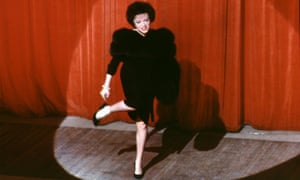 Picture Judy Garland and what do you see? For many, it will be a rosy-cheeked 17-year-old in a blue-and-white gingham pinafore en route to the Emerald City. No surprise, then, that when the fabric of picnic hampers began its fashion renaissance circa spring 2016, appearing on catwalks, Instagram and the woman next to you on the bus as frequently as Dorothy longed for home, Garland’s character was often cited as style inspiration. The checked print is a byword for the wholesomeness associated with this young girl from Kansas – and fashion wanted a slice of it.

Watching the new biopic Judy, in which Garland is played by Renée Zellweger, it’s clear her style didn’t start and end with that pinafore. Before Garland’s death, after an accidental overdose at the age of 47, she starred in more than 20 films and, according to the film’s costume designer, Jany Temime, Garland’s style is as enduring a part of her legacy as her voice, warmth and one-liners.

“She had a very specific style,” says Temime. “She was always playing. She was a comic; a witty woman.” She thinks of the outfit she dressed Zellweger in for the scene of Garland’s wedding to Mickey Deans, her final, short-lived marriage. The short blue dress, with frills at the neck and a matching blue pillbox hat was a look that Temime interpreted for the film, “but the original is as stupid and silly as that. She styled it herself with that little hat. That’s so Judy Garland. She was trying to have fun with life.” And fashion fun rang out via her love of feathers and sequins.

The film focuses the spotlight on her later life, specifically the year before her death in 1969. Tweaked out after decades of drug addiction and alcoholism, broke and haunted by past trauma, she is forced to go to London for five weeks of performances at the Talk of the Town cabaret club in a bid to earn enough money to help her reunite with her two younger children.

The costumes were all inspired by things Garland wore, but nothing is an exact copy “because we had very heavy copyright” says Temime, “but also because I didn’t want to copy. The film is about Judy Garland, but it’s not a documentary about Judy Garland; it’s a drama.”

Red scarves worn by Garland were reinterpreted as a giant red bow tie on Zellweger’s character – a nod, says Temime, to the well-known tune Be a Clown. A red, pleated frock Temime saw Garland wearing in an interview became a red dress worn during an ill-fated TV appearance, followed by an ill-fated performance at the club.

“It was understanding her and thinking she would have worn red at that moment – I was having a sort of sixth sense telling me this.”

“It was much better to work in opposition on that film,” says Temime of the clothes. For example, at the start of the film, when Garland finds herself essentially homeless, Temime dressed her in a bright orange jacquard suit and green silk blouse. “She’s trying to find a hotel to spend the night, and she’s dressed up for the stage. This is her life at that moment. She is a star without a roof, but she had to look like a star.”

In a later scene, before a high-stakes opening night performance and shut away in her hotel bathroom, Garland makes for a crumbling figure, but her clothes would have you believe otherwise. Her dress, says Temime, is “a very big contrast with her state of mind at that moment … She feels like a piece of shit, she feels terrible, she’s drinking, she cannot sleep, she’s full of drugs.” But the outfit speaks of Hollywood glamour meeting the London stage. Later, when she is buoyed up by a successful first night in London, Temime dresses her in pastels: “She starts feeling better, so I thought I don’t need, any more, the aggression of the colour.”

Garland’s style has echoes in the modern day beyond picnic-hamper chic. Look to the statement sleeves that her character, Esther, wore in Meet Me in St Louis – now ubiquitous, from high-end brands such as Balmain to high-street shops such as Zara. Or the waistcoat and tailored jacket she wore in A Star Is Born, which wouldn’t look out of place at the most recent Marc Jacobs, Gucci or Burberry shows.

Then, of course, there’s the prairie dress, which has made the last few seasons feel like O Pioneers! – or a journey down the Yellow Brick Road. Garland’s off-duty “mum wardrobe” in the film, which Temime made distinct from her more glamorous variety looks, chimes with the kind of easy style Miuccia Prada likes to champion. There are abstract printed shirts and camel-coloured cigarette trousers. “She was a woman from the States, and in the States they were wearing slacks,” Temime says.

The modern feeling of some of the costumes helps to hammer home the present-day echoes of Garland’s story. It was during her adolescence, which played out on sets, that she first became addicted to the drugs that would cause her death – MGM, to which she signed at 13, would give her amphetamines to keep her awake for long working days, and barbiturates to sleep on command. The film flashes back to these years of weight-shaming and abuse. It is no secret that child stars are also often beset by difficulties well into adulthood. “It could have happened today,” says Temime. “We have lots of examples.”

Despite using lots of vintage clothes, she didn’t want it to feel like she was creating a historical figure, hoping instead to make her feel dynamic and alive. “I didn’t want to put Judy Garland in a pocket of 1968,” she says. “At a certain point you forget that it was once upon a time, it could be now,” she says. “I wanted to make it feel like she is completely eternal. She could still be alive. She’s not dead … she’s still there, and everything she was wearing we could wear now.”

• Judy is released in the UK on 2 October.