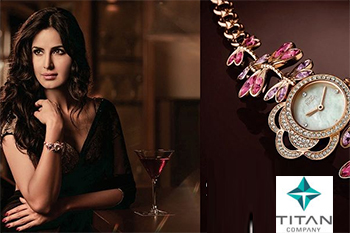 Titan’s Jewellery segment witnessed reasonable growth in the festive season and the company did better and market share gains were evident. The division met its revised expectations for the quarter. While the revenue growth for the quarter is 11%, the retail growth was much better at 15% (the base quarter, Q3’19, had a large institutional order for gold coins of ~Rs200cr).

In early October, ‘Virasat’ collection, inspired by the rich heritage and artistry of the royal city of Udaipur, was launched in the plain gold category for the festival season of Diwali.

During the year, the division added 34 Tanishq stores, 8 Mia stores for the year to date on a net basis, with the retail space addition being ~117,000 sq. ft. As of now, it is expected that we may add only around 50 stores for the year. This is primarily due to the operational delays in the roll-out and not because of the change in plan to reduce the number of stores to be opened.

Titan said in the press note that the general economic slowdown in the economy leading to poor consumer sentiment and lower walk-ins has been a concern for the last few quarters. The company experienced different consumer responses in each of its divisions. Retail sales in jewellery were better than expected at the beginning of the quarter, possibly due to a good wedding season and reasonable inelasticity of wedding jewellery, but growth in Watches and Eyewear were difficult to come by. Sales in all divisions in the second half of December was also impacted to some extent due to forced store closures due to the protests in the North East and many other parts of the country.

Watches & Wearables division’s growth for Q3 was flat compared to the previous year. The market for watches itself is estimated to have declined by around 4% due to poor customer sentiment and this led to primary sales to trade and eCommerce channels declining sharply. Its own retail stores (WOT, Fastrack and Helios) grew quite well despite the weakness in the market, the company said.

Further, Eye Wear also witnessing two strong quarters, the division’s revenue grew by only 2%, primarily led by heavy competitive activity, lower primary sales to trade channels and the disruption in the second half of December due to the nation-wide protests. Growth for the year as a whole was good at 14%.

The division added 63 stores during the year to date and also closed 22 stores, ending up with a net increase of about 27,000 sq. feet of retail space.

CaratLane continues to record strong growth in Q3 despite the softness in the market. Growth for the quarter is around 65%. During the quarter, CaratLane launched the Ombre collection which was very well received by consumers. 11 new stores were added in the quarter taking the store count to 82.

Why your neighbourhood jeweller is going out of business