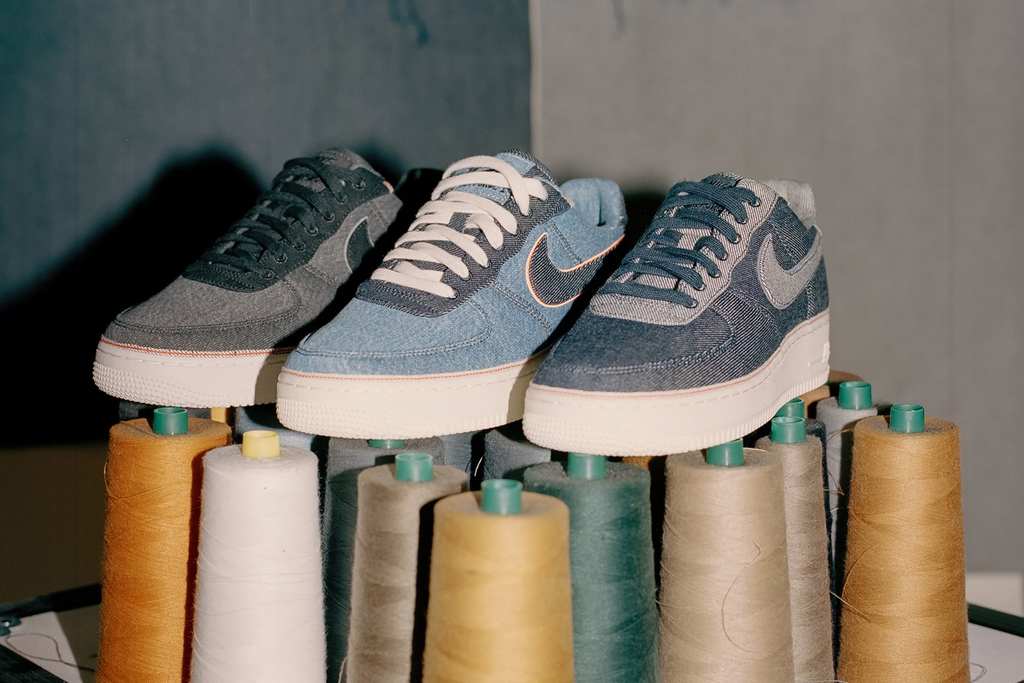 In the back corner of a clothing boutique in downtown Manhattan, past the bolts of denim hanging from the wall, eight tailors and one cutter are at work sewing custom jeans. Each will make just two or three pairs in a day.

The shop, called 3×1 (three-by-one), has intrigued shoppers and industry insiders alike. It is known for experimenting with selvedge denim sourced from mills around the world and for playing with new designs. Fans include professional athletes such as Lebron James, Tony Parker and Victor Cruz, whose superhuman physiques are ill-served by off-the-rack denim. A fully bespoke 3×1 pair can run upward of $1,200, but there are other ways for a high-end label to gain exposure to new shoppers.

On Friday, 3×1 and Nike Inc. are releasing  three limited-edition selvedge denim shoe styles, putting the type of fabric on the Air Force 1 for the first time ever, after 1,500 iterations. The sneakers cost $130 and come in stonewash blue, raw indigo and black denim. It’s an important moment for the small denim house. “We’ve had so many Nike relationships over the years,” said owner and denim industry veteran Scott Morrison. “I hope that this will be the first of many things we get to do.”

Nike is under constant pressure to develop new styles, so it often collaborates with outside fashion houses and designers. Drops happen every few days in an eternal cycle of hype, long lines and sellouts. Nike delivered strong results globally last quarter, but had weak sales in North America due to a slow period at its U.S. retail partners. Using non-traditional materials is one way to stand out, but the new collaboration won’t be the first denim sneaker. Adidas, Puma and Converse have all sold denim styles. Nike previously made denim skateboarding sneakers and Air Jordans in collaboration with Levi’s.

The relationship between Nike and 3×1 began, at least in part, like many New York relationships: thanks to forced proximity. The 3×1 store is right next door to NikeLab 21 Mercer, a high-concept shop that’s frequented by celebrities and hosts regular sneaker drops. Nike Chief Executive Officer Mark Parker began visiting the neighboring shop in 2011, and Morrison often chats with Al Baik, senior creative director of men’s footwear at Nike Sportswear. Baik wanted to put high-end denim on people’s feet. ”It only made sense to leverage Scott’s passion and expertise to get us there,” he said.

Denim is enjoying a widespread resurgence at the moment, having mounted a comeback in the past two years after shoppers passed over the classic style in favor of leggings and yoga pants throughout the mid-2010s. Morrison was along for that whole ride: He’s been in the denim business for decades, first with Paper Denim & Cloth, then Earnest Sewn, before going on to run Japanese denim company Evisu.

At 3×1, the custom jeans are its standout product, but the bulk of its business is in wholesale. The label’s regular jeans run for around $200 to $400 and can be found in luxury retailers such as Saks Fifth Avenue, Bloomingdale’s and Net-a-Porter.

Morrison hopes to open additional 3×1 stores in California and Europe. He declined to share revenue numbers, but said the business is now “as close to I’ve ever seen to profitable.”